That is the subject of my book God Talk.

For many people this is a very serious topic. For others a a topic that begs for a touch of humor and cynicism. An example of the latter is God Denies Talking to Pat Robertson by Andy Borowitz.

Borowitz begins: Just days after the Rev. Pat Robertson claimed on his “700 Club” program that God warned him of “mass killings” in the U.S. late in 2007, God held a rare press conference today to deny having spoken to the controversial televangelist.

For the usually publicity-shy King of the Universe, the press conference held at the Chicago Airport Marriott signaled a sharp break with tradition. . . . God said that He decided to convene the extraordinary press briefing because “I had to set the record straight about this. I want to make it clear that at no time at the end of the year did I have any conversation with the Rev. Pat Robertson,” the Supreme Being said. “Personally, I think the guy is delusional.”

CONVERSATION ON PRAYER WITH DARLENE, KATHY, AND FREDA (from God Talk, pp. 9-10)

Recently, I was with friends in Denver. There were four of us sitting around a dinette table having lunch. “Tell Freda about your new book,” Darlene urged me. So I introduced the topic of the silence of God. Within minutes we were on the subject of prayer, and in the course of our conversation I told about a public testimony of answered prayer that I had heard many years ago. I was then teaching at Grand Rapids School of the Bible and Music, and every Monday we had “report chapel.” Students or faculty would stand up and share ministry experiences or answered prayer or prayer requests. This particular occasion was a warm sunny early September Monday. A young man stood and shared God’s answer to his prayer to not let it rain. He had spent the weekend at Lake Michigan with a youth group and he told how, in answer to his prayer, God gave them sunshine the entire time—not a cloud in the sky. I cringed as I listened. West Michigan had been enduring a prolonged dry spell, and we desperately needed rain. To be fair, the young man was from out of state and he may not have been aware of the severe drought, but the point I was making to my friends over lunch was that we should be cautious about making such claims for answered prayer.

Freda strongly disagreed. In fact, she had an answered rain-prayer on the tip of her tongue. She told how she had taken her grandchildren to play “put-put golf” and it started to rain just as they were arriving. Her young grandson announced that he was going to pray that God would stop the rain long enough for them to play their eighteen holes. As Freda tells the story, the rain stopped long enough for them to complete their round and it started up again as soon as they were finished. In her mind it was God’s way of making himself real to her grandson.

Now, I realize there is no way to counter an answered prayer, but I did challenge Freda, wondering if we really should want our grandchildren or anyone else to have that image of God—one who holds back the rain for our put-put golf. Is God then like a genie in a bottle, ready to do our bidding? And I asked about the little boy who arrived to play put-put as they were leaving. Did God dump on him just because he didn’t say a prayer?

It was an animated discussion, and Kathy was the next one to offer a personal testimony. A graduate of Moody Bible Institute, Kathy was nurtured in a mentality of asking God for specific needs—particularly money, a common need of college students. She was going through some tight financial times, and she prayed that God would provide $1000. Only days later in the mail she received an envelop with a letter from the IRS—a bill for $1000. “You mean a check,” Darlene interjected. “No, I mean a bill!,” Kathy insisted. “The IRS was claiming I owed $1000!” For Kathy, it was like “a slap in the face,” and it led to a difficult time for her spiritually.

The conversation with my friends moved away from the table on to the sofa and easy chairs, while Darlene got out her well-worn Bible, and we talked for most of two hours about God and silence and answered prayer and unanswered prayer. We ended as four friends with four different perspectives. . . .

MORE FROM THE BOOK INTRODUCTION

The uniqueness of this book is its celebration of God’s silence—or, if not that, at least a sense of security in God’s silence. Much has been written on the silence of God, but most often with a sigh of resignation—as though the silence is something that we endure. Here I maintain that silence is better than speaking—if for no other reason than the fact that silence is far less open to misinterpretation and disagreement than is the spoken word. When God is silent, who can claim to be God’s spokesperson and interpret for God? We too must be silent, and that’s not all bad.
Most people regard God’s silence as though it were the silent treatment. It is not. It is surely no sign of passive-aggressive behavior. God’s silence is neither good nor bad. It simply is. Silence is an attribute—or, if not that, an attitude of God—and for that reason, even as I worship God, I celebrate God’s silence. I not only celebrate God’s silence, but I also cultivate my own spiritual journey in light of God’s silence. I take God’s silence seriously, but at the same time I am often amused and even humored by this Silent One whose whole world in his hands is more than our little solar system.

Another important aspect of this book is its focus on two genres of writing that are rarely brought together in the same context. I refer to them separately as the literature of listening and literature of lament. The former includes the mystics throughout the ages but I focus primarily on contemporary Evangelicals who speak and write about a talkative God. The latter are more likely mainline Protestants and Catholics whose lament over silence is sometimes related to personal sorrow—though often less a lament than a statement of fact. This literature, though often from a different perspective than mine, has provided substance and support for some of my tenuous conclusions. The book affirms three primary propositions that emerge repeatedly. The first is that apparent experiences of interactive supernatural communication with God should not be perceived as a higher way or deeper spirituality. Those who do not testify to such intimate conversations with God are often made to feel as though they are lesser Christians—ones who are missing out on a higher level of spirituality that is available simply for the asking. Unlike some religions, Christianity does not promote the concept of tiers of spirituality that afford those on the highest level a unique capability to converse with God.

The second proposition is that there are negative side-effects to this sort of interactive personalized spirituality. Such a spiritual perspective too easily humanizes God, whose voice often begins to sound very much like our own. It fails to recognize our own subjectivism and our own inclination to be self-absorbed. It tends to focus more on the individual than on the community. It easily lends itself to spiritual abuse (as in I prayed about this decision; therefore, it’s right). And it opens itself to elitism—a favored friendship with God (as is true in everyday name-dropping when people reference their familiarity with the rich and famous).

The third proposition that repeatedly emerges is that there is a time-tested, biblical “middle way” that affirms neither a garrulous God nor a distant deity. It recognizes God’s sovereignty in the universe whose distance and absence is ameliorated by the Incarnate Christ who lived and walked among us, was crucified, died and rose from the grave, leaving behind the Spirit who guides us in all Truth, the very Word of God—the silent Word of God. This recognition of God’s silence should not be seen as a step backward—a move toward liberalism or worldliness. Indeed, I will argue that the talkative God of today is a second-rate version of the Trinitarian God who as Father spoke in times past, who as Son Incarnate lived among us, and who as Spirit inspired and illumines the Scriptures, the silent Word of God.
Posted by Ruth A. Tucker at 8:10 AM 1 comment: 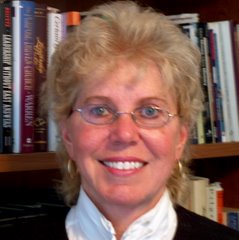 Looking for a speaker? For academic and church conferences or for the Perspectives course, email me at tuckerworst@comcast [dot] net.

Ruth A. Tucker
I'm a retired teacher, writer, conference speaker, current gardener and creator of folk art that I sell and show people how to make at our shop, Carlton Gardens. Husband John Worst is Professor of Music emeritus at Calvin College turned carpenter. We love the outdoors and living on the Grand River, and we delight in our grandkids, Kayla (and husband Ariel), Mitchell, Ashley, and Zachary.

God Talk challenges all the preconceived notions and theories of communicating with God, right from the get-go. It is no easy read, as it is confronts some comfortable, misunderstood ideas. . . . This is an excellent book for those searching for answers to their nagging questions about God Talk. Reviewed by Dr. R. Wayne Hagerman

I began teaching at Calvin Theological Seminary in 2000--the first full-time woman professor in the school's 125-year history. In 2003, less than 3 months after Cornelius Plantinga, Jr. was installed as the new president, I was, without warning, removed from tenure track and given a terminal appointment. I have repeatedly asked that all the evidence be opened only to be blocked by a dishonest cover-up. When independent mediators were retained by the seminary board in 2005, they called for "retroactive pay to 2003," among other things. That report was buried. I finished my second terminal appointment on August 31, 2006, and shortly thereafter published my story at www.ruthtucker.net.

Pope Benedict XVI and the Silence of God

``WHERE WAS God in those days?" asked Pope Benedict XVI as he stood in Auschwitz last week. ``Why was he silent? How could he permit this endless slaughter, this triumph of evil?"

It is the inevitable question in Auschwitz, that vast factory of death where the Nazis tortured, starved, shot, and gassed to death as many as a million and a half innocent human beings, most of them Jews. ``In a place like this, words fail," Benedict said. ``In the end, there can be only a dread silence, a silence which itself is a heartfelt cry to God: Why, Lord, did you remain silent?"

Mother Teresa and the Absence of God

Lord, my God, who am I that You should forsake me? The Child of your Love — and now become as the most hated one — the one — You have thrown away as unwanted — unloved. I call, I cling, I want — and there is no One to answer — no One on Whom I can cling — no, No One. — Alone ... Where is my Faith — even deep down right in there is nothing, but emptiness & darkness — My God — how painful is this unknown pain — I have no Faith — I dare not utter the words & thoughts that crowd in my heart — & make me suffer untold agony.

So many unanswered questions live within me afraid to uncover them — because of the blasphemy — If there be God — please forgive me — When I try to raise my thoughts to Heaven — there is such convicting emptiness that those very thoughts return like sharp knives & hurt my very soul. — I am told God loves me — and yet the reality of darkness & coldness & emptiness is so great that nothing touches my soul. Did I make a mistake in surrendering blindly to the Call of the Sacred Heart?
— addressed to Jesus, at the suggestion of a confessor, undated